Forming a monumental gateway to the Persian Gulf is a new Megalopolis spanning the Strait of Hormuz. From the Rocky headlands of the MusandamPeninsula in Oman, to the outskirts of Bandar Abba’s in Iran, two mega-structures reach out across the ocean toward each other, intersecting at the narrow throat of the shipping lanes.

At their meeting the mega-structures rise toward the sky, extending to the stratosphere with towers so high that they dwarf all pre-existing manmade structure. Permanently snow-capped, beyond the reach of human habitation linking earth to sky, they are colossal serpentine towers that dance and bow with respect and strength, acknowledging the Strait of Hormuz as a junction, an interface, a convergence between lands, with diverse and sometimes conflicting cultures and politics.

This will be a fantastic new lineal community evolving on the framework of a mega-structure. A structure with truly mega-statistics: one kilometre wide; eighty kilometres long and thrusting eight kilometres towards the heavens.

Enmeshed in the framework is a layered society, with its structures, infrastructure, sea ports, airports, commercial centres, parklands, farmlands, holiday destinations and dwellings, all evolving organically just as population centres have historically done.

Highways, transport and humanity will trace a path on this terrestrial link structure, creating a metaphorical bridge between Iran and Oman which will stand as an exemplar for all mankind. Our ability to literally rise above ourselves, liberating ourselves from the petty, the negative, the destructive. Embracing the positive in mankind and thereby humanity in the true sense of the word. Not so much a new city, more a human centre. 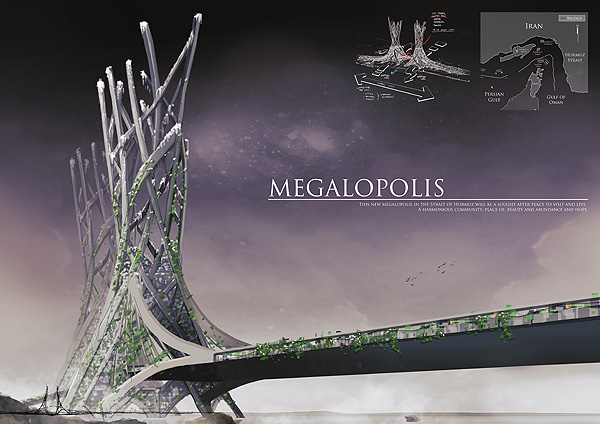 Collaboration with LWK & Partners Architects (Hong Kong) The completion site sits geographically centrally to the suburb of Ryde, which in…

Williamson Architects + TE&C Architects & Associates (Taiwan) Urban space is a tapestry of many features. People, Nature, and Water are…

le marché is a mixed-use development locates in southern suburb 20km from Brisbane CBD. The design is to create a pedestrian…